The idea of a plane traveling campaign has never really interested me. I always like it when I am gaining enough fluency with a setting that I can began to add lib on my own as a player. Jumping from gonzo plane to gonzo plane while playing a rat butcher from 1890s London sounds fun, but at a certain point the comedy of juxtaposition wears thin.

The idea of Purgatory similarly disinterests me. You die. Then you wait around a sanitary, not good, not evil place until all the little bad things you did in life are purified and you can go to Heaven. There is no tension in Purgatory, you aren't on probation where you can mess up and get sent to Hell.

So lets try and fix both of those with this plane/adventure(/dungeon?) concept.

There is said to be a place between this world and the next.

This place is said to be a network of canyons forming a circle around a faint and cold Sun. This cool celestial giant rises and sets, but in the center of the maze it oscillates on a vertical axis (not ringing the world as a faithful dance partner like in our good home). At night it sinks to kiss the center of the maze for a moment, and then it rises again to begin a new day.

The souls that find there way to this place call themselves Travelers, for they know that if they can reach the center of maze when the dim Sun kisses the earth and they touch the Sun the will be permitted to ask for one True Desire and will be allowed to move on to the next world. The Travelers hail from many different worlds, but they have all found their way to the Canyon.

Not many Travelers reach the center of the Canyon. Many loose faith, turning to cynicism and despair where they tarry on the Road. These cynics have built cities, claiming that this is the next life, that they should make the best of their time here by wasting away their time in hedonism and avarice. They take advantage of the hopeful Travelers, charging tolls for safe passage through their lands. But they wither and die in the Canyon, just like everyone else. No children can be born here, no planted seeds grow to trees, only rot blooms.

The cynics call the place the Meat Grinder, or the Labyrinth of Dust, or the Alleys of Despair.

Structurally Soul Catcher Canyon resembles a large disk with canyons inscribed on it winding their way to the center. These winding canyons intersect regularly at nodes. These nodes are centers of meeting and conflict. Many toll takers have setup their booths to get their due from the striving Travelers working their way to the Center.

The canyons in-between the nodes are still inhabited but operate much closer to a wilderness than a dungeon/cityscape, and even then I recommend using them as flux space.


So using the basic geometry of the dream-catcher above we can make a point crawl map:

Structurally we can see that there are seven "rings" of nodes relatively equidistant from the sun, and there are seven nodes to a ring. Souls enter the Canyon in the Outer Rim and work their way to the center to leave the plane. There is a minimum of seven nodes that they must visit on their way, passing through eight canyon floors.

The scale of the Canyon is very large, with most canyon floors being a mile across and the canyon walls are all around a mile high. The circumference of the outer ring is on the order of 300 miles

There are many paths to take, none of them is correct.

Light, Water, Clones, and Soil Formation: Ecology of the Canyon

So the big thing we get to play with in the Canyon is "aspect", the angle that the sun hits a surface. In our case the surface that we care about is the Canyon floor and walls. More light, for longer, and at a more perpendicular angle leads to a higher energy input into a system. The below two diagrams shows the the relationship between distance from the sun and amount of light a given canyon will get:

So with that we can derive the energy, and therefore the heat characteristics of our concentric rings of nodes. The farthest out ring will be the very coldest, with its sunward wall getting some direct light and its floor only reflected heat from the wall, and the outer-facing wall remaining very icy and dark.

Because this is intended to all be a viable adventuring location I will assume the outermost ring is as cold as the coldest earth ecosystem, a tundra. Each ring closer to the sun will be warmer and warmer until we arrive at the desert at the center that gets continuous light. Using our handy rainfall/average temperature ecosystem graph we can create an easy way to assign ecosystem characteristics to an area: 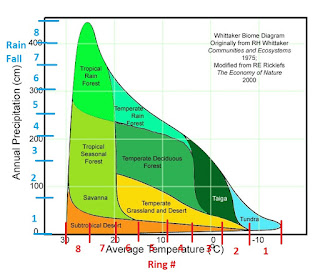 The ring number remains static and determines the average temperature at the bottom of the Canyon. For rain fall/water content simply roll d8 and use that value as how much water is present in that system. If there is no ecosystem mapping to that rainfall value round down to the wettest possible ecosystem for that temperature and add a river, lake or sea to account for the extra water. For example in ring 5 I rolled a d8 and got 8, meaning I got a temperate rain forest with many large lakes.

There is no sexual reproduction possible in Soul Catcher Canyon, and because of this clones rule the Canyon. You see, asexual reproduction is totally fine. This means that the ecosystems are dominated by lifeforms capable of clonal reproduction, and these lifeforms experience a glacial genetic drift relative to the rapid diversification of sexual recombination. To make things worse any plants or animals that make it to the Canyon must first survive the tundra in the Outer Rim and make their way to warmer climes where the can establish their hegemony.

Because of the low probability for a diverse and adaptive ecosystem the the entire Canyon food chain is based on corpses, not unlike the Lut Desert in our plane of existence. Most everything that enters the Canyon dies there, and they act like migrating birds caught in unworldly heat swell dropping them from the sky to be fed on by scavengers.

There is no vulcanism in this plane, but the canyon walls do shear off occasionally leading to the formation of sedimentary rock. Even down to the geology there can be no birth here, only death, for what is a volcano but an explosively pure act of creation in the blink of a geologic eye? No, the Canyon only decays, and on the dust of the bodies of the fallen are the brief lives of the Travelers lived.

Example Encounters and Locations in the Canyon:

The Sky Gate: Usually just a stately carved archway set into the Outer Rim's leeward (?)(opposite of sunward) wall like all the other Gates that emit Travelers, it occasionally spews forth great vapors and mists into the Canyon. Those Travelers that have seen it rarely survive the super-cold fog or the shapes that scream in the twilight. When the fog dissipates and the killing cold passes they have found the bodies of creatures that have violently dedicated in the heat of the Outer Rim, the creatures seem to come from a much colder plane of existence.


The Divine Cabal of Liches: Many forms of artificial life extension are available in the Canyon, one of the most expensive but sure ways is Lichdom. But first you must sumbit yourself for approval at the Divine Cabal, and if you are judged worthy they will not hinder your quest for immortality. They long ago gave up on leaving the Canyon, preferring to drink deep from the well of ego and squabbling amongst themselves, so woe unto the Traveler who would stand in their way.


Warbeast Strike Team vs Megapradator: When new Travelers come to the Canyon they often literally come in waves. Clonally reproducing megapredators lie dormant near an entrance portal waiting for the feast to come, while brave and kind souls riding a mishmash of cancerous vat cloned warbeasts rush to save them.

Empire of the Starfish People: The largest nation in Canyon is the Starfish Commonwealth, dominating the seas and rivers of the inner rings with their dead eyes and blithe smiles. They reproduce easily in this strange land, a melee will do to hack off some limbs to grow new starfish people. The Commonwealth's goal is to perpetuate the cycle of death and decay, for it suits their strange lifestyle.