Review: Beyond the Wall

I recently re-discovered this lovely post about the 1937 Hobbit book as a RPG setting, luckily for us the author has continued to write about this Wilderlands setting and mentions that they use the Beyond the Wall system to run their games. Their impression of it seemed good, so I picked up the books and played two sessions using the rule set for my group. Here is a review. 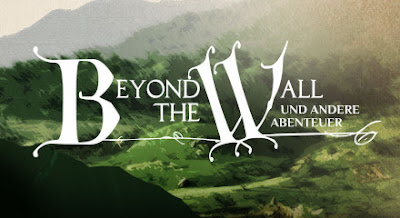 Beyond the Wall styles itself as a "pick up and play" style RPG, many of its design elements are aimed at streamlining play and unburdening the planning required to run a game. It is also a retro-clone, a game heavily inspired by the first editions of Dungeons and Dragons, throwing it's hat in the ring against other OSR gaming systems like Lamentations of the Flame Princess, Swords and Wizardry, Basic Fantasy, etc. Lastly, and what most caught my eye is the specific flavor of fantasy the system (and therefore the implied setting) works to create, fantasy after the style of Ursula K. LeGuin's Earthsea books. The materials provided are predicated on the premise that the adventuring party all comes from the same village and grew up together, just the sort of homey folksy aesthetic I enjoy.

To demonstrate how light weight the rules are, of the 100 odd pages of the core rule book it only takes 30 pages to cover the core rules. Anyone familiar with D&D should be able to pick this up, skim those 30 pages and be ready to play. My group plays primarily D&D 5e and they picked everything up quickly, something I cannot say for other retro-clone rulesets I have encountered.
All of the "crunch" of other systems (huge equipment tables, 12 different base classes, a gaggle of fantasy races, lists and lists of skills, etc) are extremely and elegantly condensed. There are only three classes: the warrior, the rogue, and the mage. Every character concept can be expressed through those classes and different ways of mixing and matching of class features for multiclass characters. If you want to play a barbarian you can customize the warrior to be a barbarian. This is how different races are handled as well, the example in the book is the Elven Highborn, a mish mash of the warrior and mage class.
When a party is sitting down to play their first adventure in the system character creation can optionally be done cooperatively as the first phase of play. This cooperative character design intertwines the character's with each other and the village they all come from, nicely answering the question most adventuring groups struggle with when forming "Why the heck do we all decide to go risk life and limb with each other?" The character creation is handled as a series of tables, called a playbook, each is titled after the character trope they are aiming for. For example the two playbooks provided for the warrior class are the "Village Hero" and the "Would-be-Knight", and each playbook builds a distinctly flavored character in that theme.  This also handles ability scores, skills, spells known, special equipment, and established relationships with NPCs. While all of this is optional, I think it is one of the best innovations the system provides.
The DM is also given a similar worksheet of tables to run the adventures, called scenario packs, that are provided with the base rule book. As character creation occurs the DM makes notes of specific NPCs and locations relevant to the party and intertwines them with the adventure elements. A series of tables also generate a whole adventure, but puts a lot of burden on the DM to create encounters on the fly.
There is a more to say about a few other quirks of the system, but suffice to say that I am pretty pleased with the ruleset and like the structure of character creation and adventure generation.

Using the provided character playbooks my group built characters and we played through the "Angered Fae" scenario pack over two sessions. Before play I simply copied all of the tables and tweaked some of the results to be more fitting to my Ánemos setting. This was pretty straight forward and totally optional, I think I could have run the session as written in the scenario pack without too many issues.
Character creation was a blast. There were a lot of funny coincidences, three of the characters rolled the same "You are about to marry into the Miller’s family" result and we agreed that they were all competing for the hand of the same person. Part of the scenario pack is to describe pairs of players handling some fey chaos together in the days immediately before play begins, doing an excellent job of setting up some interpersonal mechanics for the outset.
While the adventure design is quite literally formulaic, a skilled DM should be able to throw some content together based off of the results from the tables to make a satisfying adventure. There are enough moving parts to make it seem like a lot of planning has gone in to it, a hard effect to simulate.
At the end of the adventure the consensus was that it was a pretty fun game.

8/10, a serviceable lightweight OSR RPG system with some innovative design tools that make it a real gem. I plan on writing some content in this format for my own settings (because I can't seem to sit down and write a whole adventure in a more traditional sense and a series of tables seems much more attainable for expressing my ideas).
Check it out here!
Posted by Connor W. at 11:17:00 AM No comments:
Email ThisBlogThis!Share to TwitterShare to FacebookShare to Pinterest
Tags Ánemos, Beyond the Wall, Game Design, Review
Newer Posts Older Posts Home
Subscribe to: Posts (Atom)