(Follow up on the dungeon hinted at in the Mangrove post. This is meant as a sketch of the broad concept, not a keyed dungeon.)


The crazed ecologists who study the Flowing Forest have long posited that at the center of it must be some great mystery. Its well recorded that the forest will "swim" against prevailing currents and winds, and it takes a proper monsoon to alter its path. Theories gain and loose favor, but a few have remained popular:

None of these are the right theory of course. If you survive the journey to the center of the forest you will find a great terraced valley, its bottom is a few hundred feet bellow sea level. The terraces are paved with great stones and look more like ancient gardens than jungle, the root-filtered fresh water trickles slowly down to the bottom. At the bottom a great clear pool steams, and the very top of a structure can be seen...

These where gardens. Remnants of greenhouses and fountains are every where, and amongst the lush ruins on the top terrace a few final warning/warding shrines from the local Automata tribes rest, invoking their most vile imagery.

Hazards on the terraces include: feral plants, decaying architecture, insta-rot fungi, leeches, half functioning gardener constructs that WILL POT YOU, large still pools of lily pads that probably aren't hiding water snakes in them, terraced edges to descent on vines, balloon plants that accumulate hydrogen and explode easily, and giant sloth breeding grounds.

But you may find: potions of grow plant, half functioning gardener constructs that you can manipulate, exotic and potent plants from all over the world. Indeed the gardens themselves are a treasure trove in themselves to a trained botanist, the diversity and rarity of the flora is enough to bring a life time of rich research.

At the bottom of the terraced valley is a large steaming pool of water, no plants grow near its edges but at its center is a large square structure. Through the startlingly clear water you can see that it is a many leveled ziggurat. The water is very hot, but not quite boiling and there is a sharp mineral odor to the mists coming off the pool. Upon investigation the water is not only hot, but caustic and will dissolve organic materials after a few moments of immersion.

Once the party figures a way across the pool (boat that wont dissolve, parachute with hydrogen balloon plants from higher terrace, cooling the water some how, divert the water from flowing into it till it all evaporates) the real dungeon can begin.

At its heart is a sun. The party will see glimpses of it occasionally through thick glass windows and deep water, giving eerie illumination. They will find hints of it else where: in rooms dedicated to its maintenance and control with panels of inscribed glyphs that hint at their utility, in the flooded chambers soaked in near boiling and caustic water that will start to make them sick with radiation poisoning after a few hours in the dungeon, in the strange slimes and fungi that seem to grow abundantly around these leaks, and the slow perversion of flesh they will experience through mutation.

Deep at the base of the ziggurat, far below sea level, they will find the Torch. If they are clever they might even figure out that the Torch is siphoning the massive heat generated by the sun to solder shut fissures and faults in the sea bed. Perhaps they will understand that this Sun-Engine is literally keeping the world together. To keep the Torch at a steady distance from the bottom of the sea the entire structure expands and contracts like an accordion. This introduces a crushing hazard as well as a changing dungeon layout that may shift every time the party returns to it. 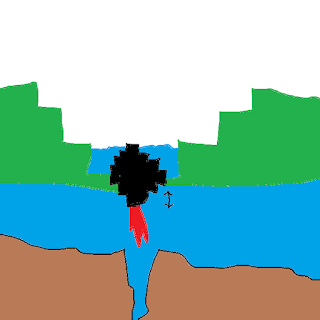 The central command room is locked, the party will have to find a way to bust in or find the secret to unlocking it. There is heavy machinery all around, perhaps they can use it for demolition? Once inside they will have to solve some sort of puzzle to figure out how to manipulate the Sun-Engine. There will be illusions/holograms of the builders of the Ziggurat There are a few possible outcomes:

Thoughts on the Inverted Ziggurat

Its a metaphor for a nuclear reactor. Built by some anonymous precursor civilization and abondened long ago, then rediscovered and haphazardly repaired by a more recent society. The terraced valley and gardens where built by the second comers as a way to keep the Sun-Engine cooled but when they abandoned it the radiation allowed the Flowing Forest to take root on the Garden Terrace edge until that was all that people knew of it.

When considered with the rest of Ánemos setting this is the first demonstration that world is a few Ages past a technologically advanced civilization and implies that its a post apocalyptic world, or at least a world fallen into decay and forgetfulness where the glories of the past are misunderstood and clouded (like the implied setting in the wonderful Ghibli film Castle in the Sky). I like this. It adds a dimension and depth to an otherwise gonzo-Greek-fantasy setting. I love fantasy that is secretly sci-fi. I also love romantic fantasy (the type that +Joseph Manola writes about here, and he makes some great points on ruins here) where the characters have the chance to have a meaningful effect on the world.

In this dungeon they are presented with a machine that literally keeps the world together and the three outcomes all are meaningful. They can play with fire and get burned with the world at stake. They can fix an ancient construct and perhaps start an age of re-disovery and healing. Or they can make the decision to find a way to love a more and more broken and shattered world.
Posted by Connor W. at 9:49:00 AM No comments:
Email ThisBlogThis!Share to TwitterShare to FacebookShare to Pinterest
Tags Adventure, Ánemos, Ecology
Newer Posts Older Posts Home
Subscribe to: Posts (Atom)