Okay, so we have a nice simple system for simulating economics in Ánemos. It's easy. We have a random Spirit Generator, also easy. Let's create a system for another piece of the Weird Mythic Fantasy pie, the Gods.

This is a series of tables meant to flesh out the god of an island that your party may be visiting that you didn't have time to write out. These generation categories go in order of importance, and they are designed to also answer questions about the populous that worships them. Another design goal is to produce super weird results that will kick your brain stems out of creative inertia (at least that's the goal).

Some cools ideas are here too.

This is to distinguish the God from Spirits, their interests and scope of influence are simply very different. Think about it like the two tribes of Norse gods, the Vanir and the Aesir. The Vanir are more interested in the affairs of humans, the Aesir are manifestations of the forces of nature. Gods in Ánemos are concerned with human affairs: philosophy, drama, agriculture, writing, knowledge, etc. the Spirits on the other hand are the ID of the natural world.

(Borrowed some ideas from here)

Taboos for the faithful:

Roll a few times on this, really as many as you need to make the religion sufficiently distinct. Some results may not make sense as written, for example: The Faithful...must always...buy or sell...birthdays...in the home. Thats okay. Re-rolls are encouraged. 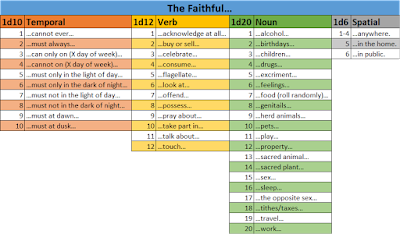 Now to create some flavor for the god, something you can tell your PCs to make them go "They worship a whaaat?"

Now you have a basic body plan and size, lets give the god some sort of strange detail, ideally based upon their domain. This is the time to throw in that weird trait you have been thinking of but never seems to fit, its a god, it can do what ever it wants! Below are some examples I thought up. 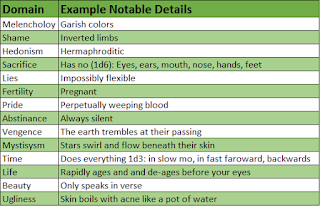 Whats the point of having a god if you can't pray to them and they sometimes listen and do something crazy? Unfortunately (fortunately?) not all gods are created equal (might have something to do with the belief in them...). If the god can grant Moderate Boons, they can grant Minor Boons too of course. Try and stick with the domain of the god generated to give you some ideas. Think of this as a "power rating" of sorts, more powerful gods can grant greater boons.

(2-4) Moderate Boon: More significant intervention now, the faithful are truly lucky to be given one of these boons. Gifting a great week of feasts that strengthen and encourage the faithful (hedonism domain), favorable winds bring exotic traders (mercantilism domain), their long-eye spies an enemy form afar and warms the faithful (watchfulness domain), those that would wreak vengeance are given aid in the form of poisoned arrows (vengeance domain), etc.

(5-6) Major Boon: Fear ye all who oppose them, for their god is on their side... Direction on how to build a magical ship (travel domain), lending their strength to an army on the march (war domain), to hide their believers behind a bank of fog for a season to avoid their enemies (secrets domain), lending their deep intellect to aid in some great undertaking (science), etc.

Rolled randomly as a sliding scale, I want little islands of super fanatics and big islands of agnostics. This may indicate the "trajectory" the god and its believers are on, ie a "weak" god (one that can only grant minor boons) that has fanatic believers may in a few generations be able to start granting moderate boons as they wax in power.

This can also describe how strictly they follow the taboos of their religion.

Patron of this profession and this class:

The god you are generating should have people that tend to really like them. These are those people.
(The profession table I stole and altered from +Arnold K. from his GLOG system)

Roll once on each: 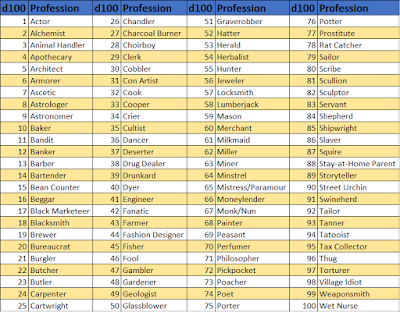 I always liked how the gods in WotC's mythos always have a favored weapon, and that their clerics always have them. Its good flavor. This could also be used to deduce how this culture wages war. 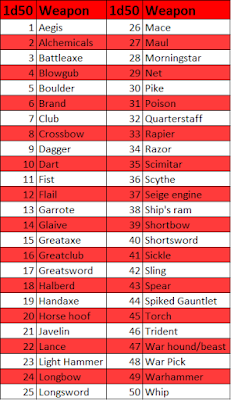 So you have a pretty good idea of what the god is all about, what are its two major symbols? These aren't critical, but I like the flavor of having a deity of being interested in a certain animal, so those animals just overrun the island because no one can touch them or something.

Here is a d100 animal table from here, reproduced with my fancy Excel color editing prowess and a d100 plant tables that I wrote (note on the plant table, it was really hard to choose a set of plants I felt were universally recognizable, throw anything out that doesn't fit in with your setting's ecology!).

Roll once on each. 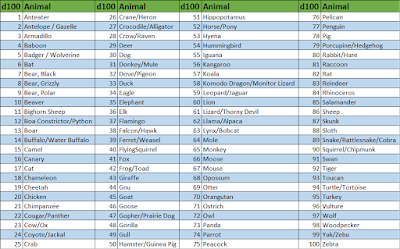 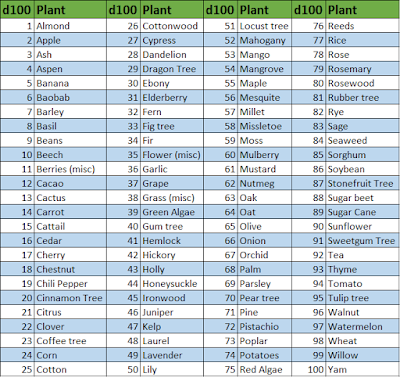 Roll on the trade table! As stated above, the gods' primary concern are civilized ones, so they tend to favor a specific good that their island produces. This generally gives respect to those that practice these trades as well.

This is the god Pagóni, Lady of the Serene Isle. Every morning her followers wake and weep or laugh or smile or frown or grimace or gawf or... into vials. They then take to the streets to barter and trade their emotions with one and other. Pagóni oversees this serenely, gentle floating on the morning sea breeze, her people once again safe from their own emotional burdens. All is ordered, everyone is calm and only feels what they paid for that morning. This is Pagóni's blessing, and her people love her for it.

Her temple is high on the Isle's mountain in a damp cave covered in moss with the music of water dully echoing on the soft walls. The woodsmen of  the Isle pray to her to be anointed with the musk of the sacred albino skunks, and their axe and saw strokes are sure and measured.

But all is not always well in the Serene Isle, and when enemies come to the Calm Folk, the footpads take to the night and strangle them gently in the dark, their callousness and hate and emotional flux is not welcome on the Serene Isle...

Posted by Connor W. at 10:18:00 AM
Email ThisBlogThis!Share to TwitterShare to FacebookShare to Pinterest
Tags Ánemos, Generator, Rules, Tables