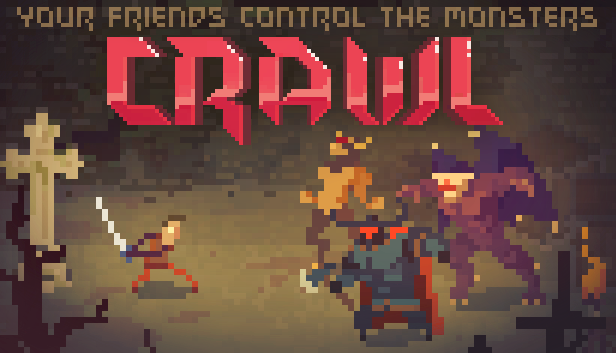 So my gaming group all hang out together and one of us had this new video game, Crawl from Powerhoof  We got so distracted we didn't even play out scheduled game that night. Its a blast, so I thought I would give it a review since it stole table top gaming time.


Above is the launch trailer, basically laying out the way it works.

You were an adventuring party delving into some horrible dungeon, but you and your buddies got cursed and are now doomed to fight each other for humanity as you descend deeper into the dungeon. You get to play as monsters/traps when you are not the only human. When you kill the human you get to be human again. You level up, buy magic weapons, loot chests, and when you are strong enough you can challenge the boss. If you kill the boss you win your freedom from the cycle!

All of the gameplay takes place on the same screen, no split screen silliness.

Nice and simple controls, just direction and two buttons. It handles pretty well. I use an Xbox controller, but the keyboard controls are totally functional as well.

The graphics are a nostalgic pixel style with an acceptable amount of detail for each monster/boss/weapon/room. The lighting effects are well done. It looks great.

The soundtrack if fun, but a little repetitive after a few rounds of play.

When starting the game you choose an Immortal that you worship, this gives you some mechanical advantage (25% more damage done with traps, monsters have more health, etc) and lays out which monsters you can manifest as.

There is a face off in the first room where as humans you all fight, the last one standing starts out as the human. This is pretty fun.

When playing as the human you run around the dungeon level looking for treasure, the item shop to upgrade abilities/weapons/artifacts, and the way down to the next level. Once you hit level 10 you can challenge the boss. 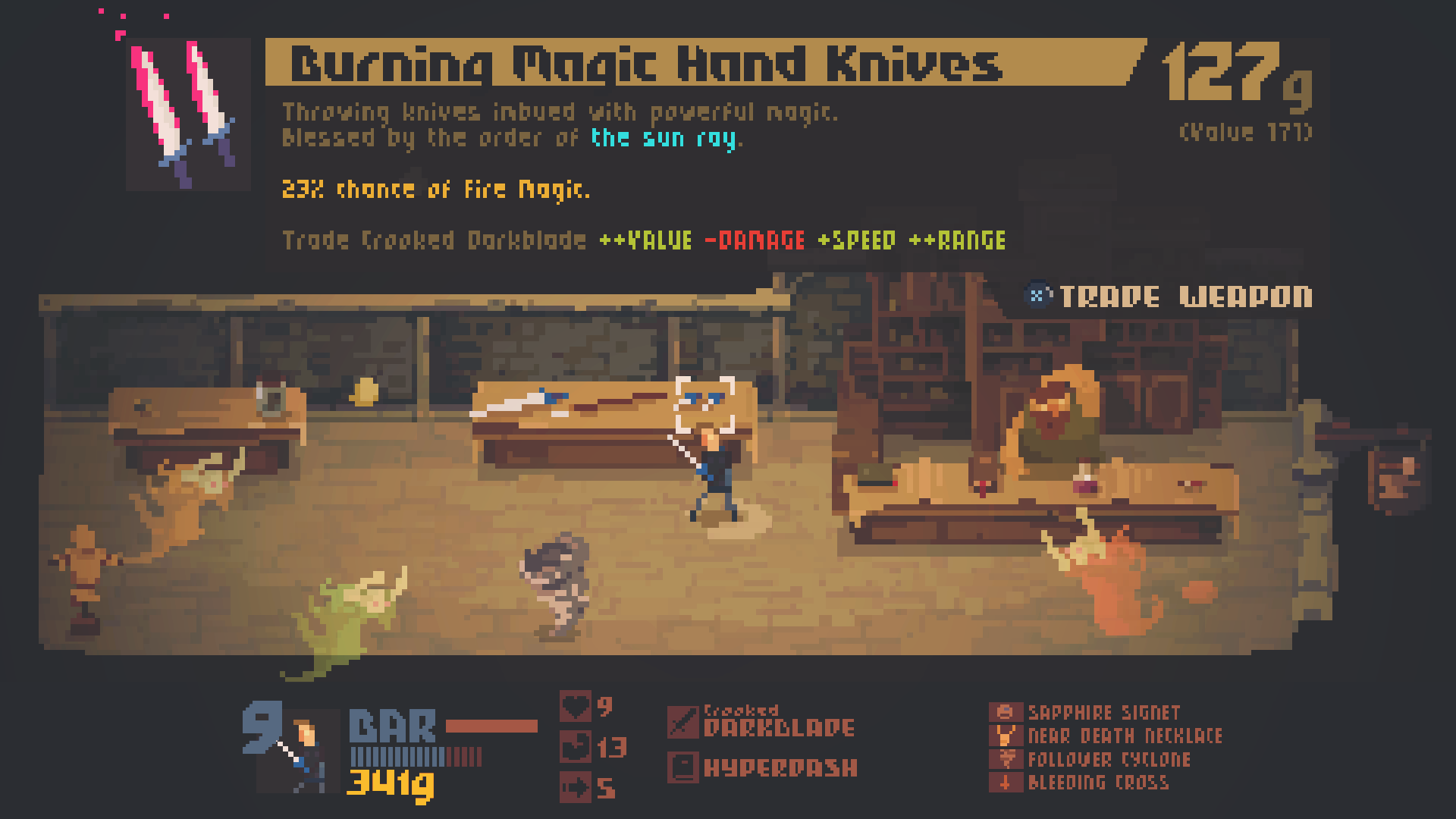 When not playing as a human you fly around as a ghost and can: interact with atmospheric things (torches, chains on the wall, blood fountains, etc), traps (buzzsaws, spikes, flame throwers, throwing crates, etc) and most importantly become a monster when you fly into a pentagram on the floor (more on this in a bit).

There tends to be a lot of changing of who is the human. When playing with all four players its a very fast paced game, and it can be hard to keep track of were your character is in the chaos.

Probably my favorite part of the game is the monster mechanics. Every time a human gains a level the non-humans all get "wrath" points that they can spend to evolve the monsters. For example you start with three wimpy little guys: a dire rat, a skeleton, and a gnome. You fight the human a bit and they gain a level, giving you some wrath to spend on upgrading your monsters to scarier things like a skeleton archer or skeleton duelist. This is a lot of fun, especially when you start playing as some D&D classic monsters like beholders, dragons, mind flayers, giants, and pit fiends. 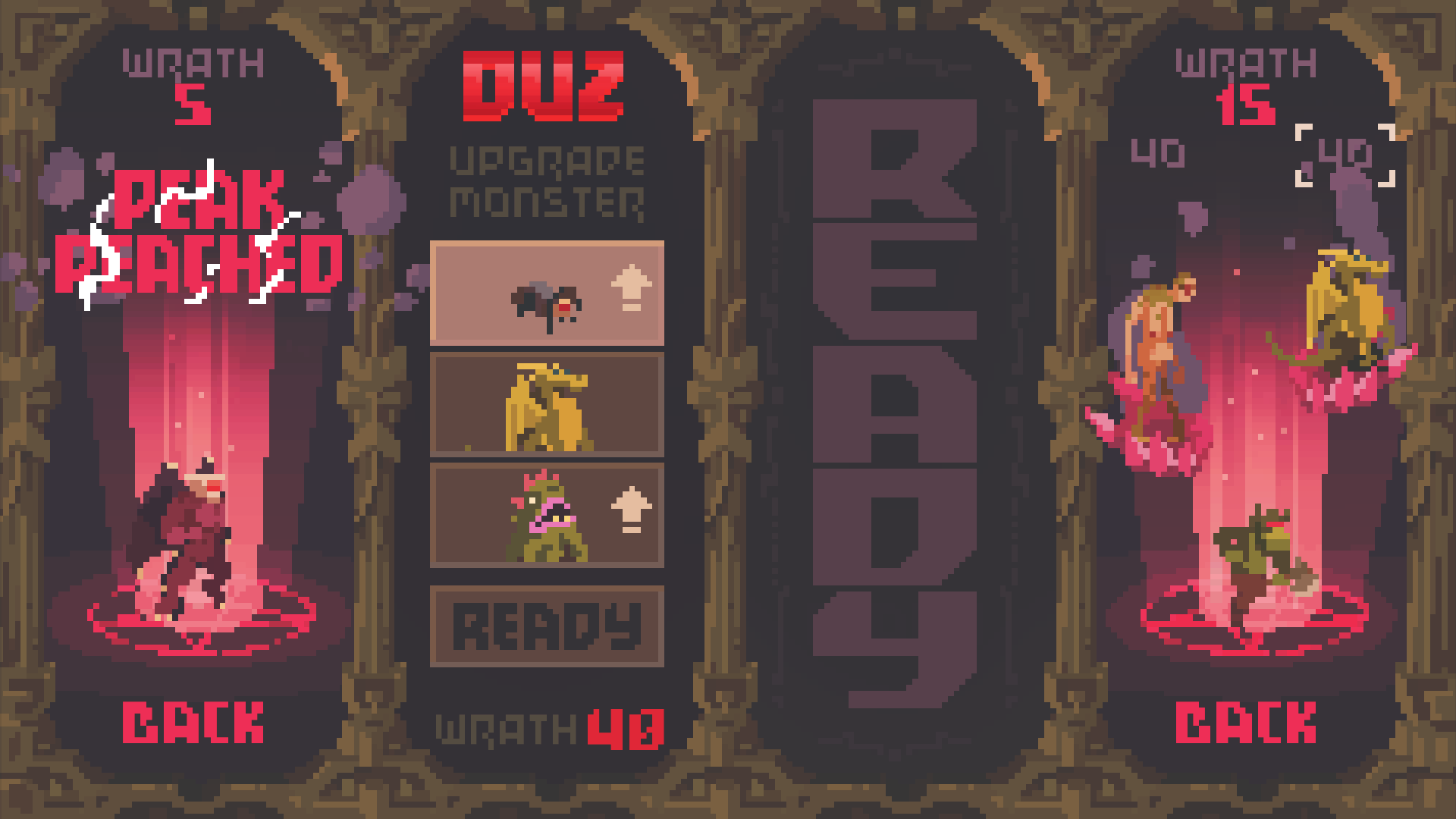 And the big trick is that you don't have every aspect of the game unlocked initially. By beating the bosses you unlock more features, ie a new weapon type, a new trap, or new monster evolution paths. Its super addicting, you finish the game and just want to play again to try out the new stuff!

What You Should Steal:

This could be a cool way to run PvP. You throw player controlled monsters at them until they die then the killer becomes a character again and runs around some more. It would require a super streamlined system to allow leveling and monster advancement to happen quickly.

The boss fights are pretty inspired, they generally each have a gimmick and escalate significantly in difficulty through the fight. I could probably write a whole post on that, but +Arnold K. basically did that here, so I wont.