The Grandsire's Enclave: A Look at Automata Culture

This is a follow up to this post, it describes the choices my players had when starting a new campaign as a mono-race, classless party.

We had our first session last night (not true, we had our third last night but  started this post three weeks ago), in which my players got to choose which race they all agreed to start play as. This also meant that I couldn't exactly plan super far in advanced with prepping things for them, this was intentional. It meant that I really got to engage with them about what they though this culture should look like.

** Digression: I think this is one of my favorite things about playing these kind of games, collaborative world building. I can sketch a skeleton, but without players it would never have flesh.**


A Proof of Process:

After priming with info about the setting and having them look over and choose a race I got to work creating a community for them to start in while they made characters. I began by using a simple island generator I have been using for shipwrecks/any time the party wants to go ashore while on a voyage to get an idea of the size and ecology (and therefore elevation) of their home. I rolled that it was small sized (1/3 mile-1 mile across) and that is has forests, so I know this is a small and very rugged island with forests at its highest stony hills.

I then rolled on some tables given in the 5e DMG, the Random Settlements Table on page 122. I have never used these tables before and I was pleased with how usable th results I got were. I rolled one on each of them just to give me enough fodder to flesh out the settlement. Here is what I got: that its ruler is a Feared Tyrant, its notable trait is that it is a Major Trade Center, and that it is known for its Great Hero/Savior (I didn't like that, so I threw it out and ran with the other two).

With that information I was able to cobble something together while they rolled their characters.

The Grandsire arrived on Nános some five decades ago, finding a lonely and rugged island devoid of inhabitants. They decided to stop their horizon seeking and settle down for a few centuries, and so they set to work making some children. After 5 or 6 variously fecund generations, the appropriate number of automata were made, 186. 186 automata, 31 Circles of 6, one Enclave under the leadership and guidance of the Grandsire.

In their infinite wisdom the Grandsire chose a strategically placed island, right along the trading routes frequented by Minoan merchants and Arsuf auctioneers. They realized the potential to act as a port of neutral ground for these groups to meet, and it quickly spread that if you wanted a fair arbiter of trade dealings you would seek the Grandsire. With a small though dependable silver mine and well stocked fisheries, Nános has become a productive island as well.
The typical form of governance for most automata settlements is Rando-Meritocracy. Every automata upon creation is assigned to a Circle to fill their ranks to a perfect 6. Each Circle is given the agency for internal self governance, as signified by their ranking of automatoa sequentially, ie the First of the 23rd Circle is recognized by their peers as the most capable of their ranks. Being the 23rd is not a ranking, its simply ordinal. At the spring and sall equinox every Circle is assigned to a new task at the Festival of Polyhedrons.

This has the effect that automata are skilled in many crafts, though favorites and specialization are normal, as the saying goes "Not everyone can excel at weaving a net, but everyone must be able to cast one."

The Rando-Meritocracy system is perturbed on Nános. The Grandsire does not rotate. They have favorites that they keep close. Some Circles never do more than menial labor. Some Circles rest on their laurels. Their ego and optimism has clouded their vision. The Grandsire rules with a firm and unyielding hand of living lava rock.

When an automata dies, either from violence or accident the living take their bodies and repurpose them. Their bronze joints will be re-smelted and cast as fishing hooks. Their basalt torso will be incorporated into the next wall built in the Enclave. Their agate eyes will be recut and set in bands of silver. Nothing is wasted.


Contrary to popular belief the automata are intimately in touch with their environment. They are made of the very bones of the earth (or the flesh of trees or the sand of the sea or the shells of the great beasts of the Channels or the grass of the field or...) Every community has an unconscious population cap that reflects the carrying capacity of their environment, simply no new automata will be created once this limit is reached, no one can "get in the mood" for it. This cap is always a factor of 6.

Because they build their offspring, they can make choices about their body plans, giving them a firm grasp of the elements of evolution. If they live their life wishing their Parent had made them a few inches taller they will make their offspring taller. Those offspring in turn wish that they had a more stable leg system to cope with their height, so they build a generation with a tweaked leg system. These in turn find that the stability system is to limiting in range of motion so they make their offspring shorter... etc.

Every automata is expected to be able to do every task in a community, and so an adaptable body plan prevails; but this is sensitive to the available local materials and environmental requirements. Due to this automata often live where few others can.

As promised, automata have a racial trait that scales with the number of automata present, thus rewading the mono-race party I have always dreamed of, a la these posts from over at Goblin Punch.

Once a day, up to one Circle of Automata can work together to build something. This can be a structure, walls, trenches, or a vehicle. More refined creations require skilled artisans, specialized tools, and more refined materials (hewn and cured lumber, cast nails, kilns, a smithy, sealing tar, a shipwright, etc). It takes 8 hours to create and is constrained by available materials (they can't build a raft out of beach rocks or a tower out of grass). After their building everyone that participated gets a point of exhaustion. If they build the next day they accrue another point of exhaustion even if they got a good nights rest.

The following equations are suggestions, where x= # automata participating capping at 6. The time required can be reduced proportionally if a smaller than maximum object is built (ie if a 10ft long and 10ft tall wall needs to be built across a hallway in a dungeon and 6 automata are available to help it would take roughly 1 hour to build instead of 8). 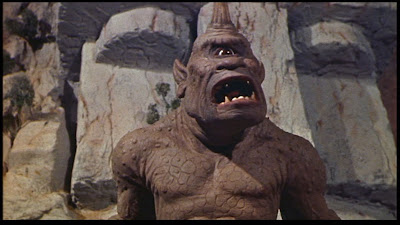 So the main conflict of the first session was convincing two wandering and "adventuring" adolescent Cyclopes brothers to leave Nános after wrecking their raft in a late season storm. They offered to build the brutes a boat to speed them on their journey. They did build them a boat. A trap-boat.

Suntribó, a wretched and quite street sweeping PC automaton, designed a boat with a sail that worked a loop of rope every time it caught wind. This loop of rope was threaded through the mast and spun a dull drill bit into the hull. So as the Cyclopes sailed away in their trap-boat they were sailing to their watery doom...

A horribly awesome way to handle stubborn Cyclopes.
Posted by Connor W. at 12:40:00 PM
Email ThisBlogThis!Share to TwitterShare to FacebookShare to Pinterest