More Rules for the High Sea

After my last post my players used my rules in game and had some notes for me, so I've put some thought to it and come up with some more explicit rules for naval combat, especially modeling ramming better. 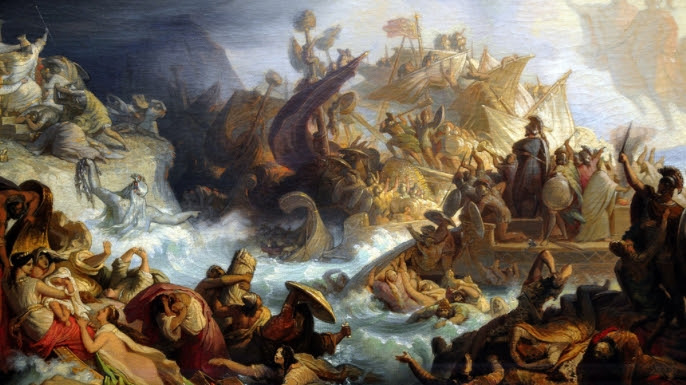 Moving your ship in combat

So ships have momentum while moving through their fluid environment. Unlike on Terra Firma you cannot simply dig in your heels and stop or lean in and speed up let alone turn about quickly. So how do we model different ships being more nimble than others? I've assigned them a maneuverability score and created a sketch of naval combat, and this is how it works.

Naval combat is slower and on a larger scale than cramped combat in a dungeon, so rounds in naval combat are half a minute long instead of 6 seconds. Also, each square on the battle mat is 25ft instead of 5ft.

This brings up the issue of character actions during naval combat rounds. I have decided to allow 1 action per round (since movement is already being taken care of by the ship), things like: row ship, man the helm, fire ballista, shoot bow at enemy, call the wind, or cast a spell. Most of these are self explanatory, but how many shots should an archer get per round? I have settled on three, six when they get high enough level for multiple attack actions per attack. I have a reason*, I promise. The same goes for spell casting, max of three per round.

So naval battles are big and long and characters can do things.

Ramming for Fun and Profit

In order to ram you must be going full speed. That means that ships that are more maneuverable can ram more often. Ramming is, incidentally, one of the best ways to do a lot of damage to enemy ships. Fire is a good option too.

But often it is in the PCs interest to keep the ship intact, in fact ships are modular and mobile pieces of wealth. And so boarding becomes more desirable. Hmm, I have to think about how to insensitive more ramming.
One of my players did some quick math on the proposed ramming damage and pointed out it would take around 20 successful rams to sink another ship. Thats not acceptable, it should take only a handful of rams to scuttle a ship, especially when constrained by a "full speed ahead" requirement.

Look at this table and understand who I fixed it. I used a galley as the base ship.

Any way, I think this stuff is usable. I'll let you know after the next session.

*The reason is that the "pinnacle" of historic archers, the English longbowmen, shot only around 6-7 arrows a minute at their fastest. So off the bat they are shooting as quickly as a historical benchmark and when they get high enough level they shoot TWICE as fast! (But also I don't want them to be able to just kill the whole crew of enemy ships with one archer...)
Posted by Connor W. at 9:12:00 AM
Email ThisBlogThis!Share to TwitterShare to FacebookShare to Pinterest
Tags Ánemos, Rules, Ships